The Local Agency Formation Commission, or LAFCO, is a state mandated independent local agency established to oversee the boundaries of cities and special districts in Santa Clara County.

What Does LAFCO Do?

By 1963, the landscape of Santa Clara County was undergoing radical change. The economic, social, and geographic terrains had been shifting in response to a post-war surge of new residents settling in the county. Housing and business development boomed, but the growth was piecemeal and disorderly. One result of this period was a sprawling suburban area that became difficult and costly to manage and to efficiently provide with urban services such as sewer and water lines. Another result was the permanent loss of prime farmlands, making it difficult for California’s largest industry at that time to sustain itself in a previously abundant agricultural valley.

The pattern of growth in post-war Santa Clara County reflected ad hoc decisions by developers, landowners, and local politicians, with little-to-no strategic planning for the future.

Similar land use dynamics were being experienced across California. In response, the State Legislature sought a solution. A steward was required to oversee growth, an independent entity empowered by the State government, but with local expertise. In 1963, the California Legislature mandated the formation of county-level Local Agency Formation Commissions, or LAFCOs. The power to regulate local government boundaries is exclusive to the State, but since 1963, under regularly revisited state law, the Legislature charges LAFCOs to carry out this authority. As such, LAFCOs are the Legislature’s watchdog institutions.

Within its first decade, the Santa Clara LAFCO coordinated unprecedented agreements between the County and the cities within it. These agreements were known as the Urban Development Policies and established cross-sector collaboration in pursuit of compact growth and sustaining the quality of life that attracted so many to call this area their new home. Cities, the County and LAFCO made important mutual commitments, adopting “urban service area” boundaries, projecting orderly growth patterns into the future. These agreements, unique to Santa Clara County, vested an increased responsibility in LAFCO, charged with enforcement and with reconciling often-competing interests in pursuit of a more efficient, more livable, and more sustainable land use pattern.

The Urban Development Policies can be summarized as follows: 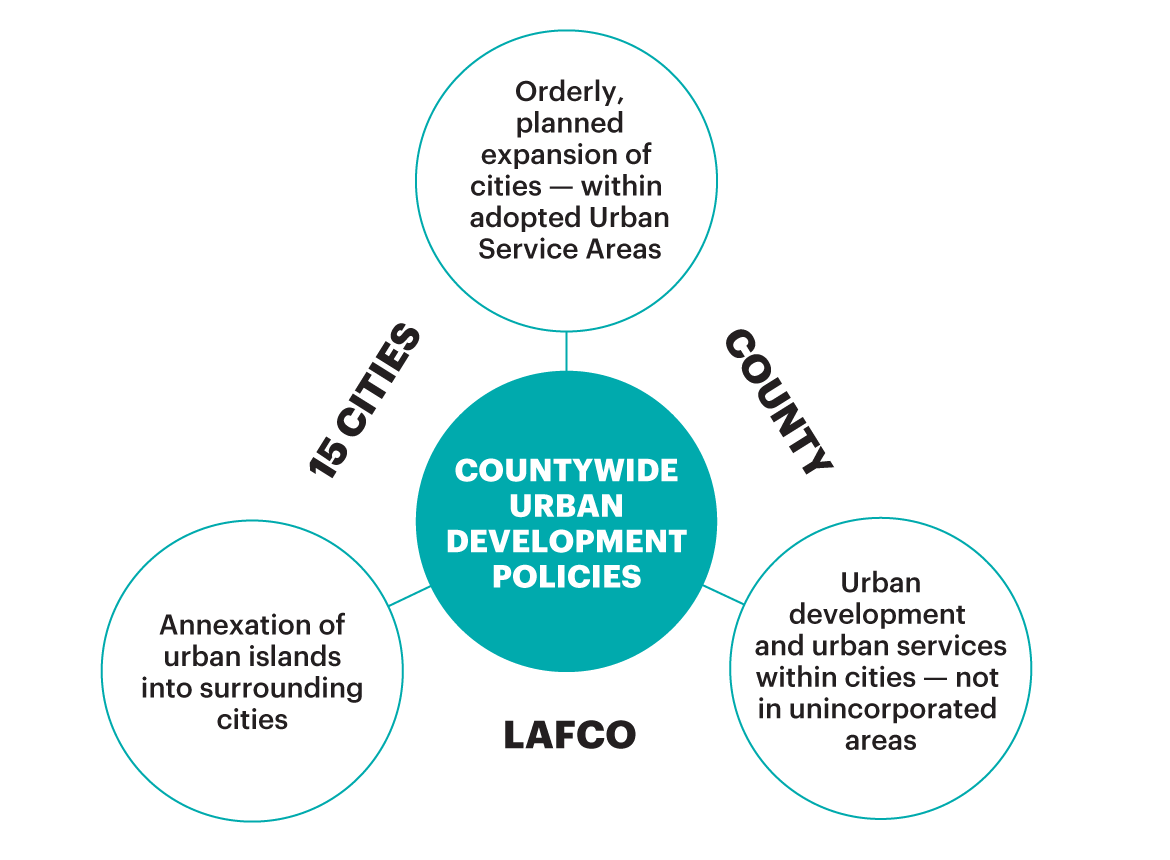 Over the past 55 years, Santa Clara LAFCO has been a stalwart for growth that is compact and well-managed. LAFCO’s influence has in turn protected the Valley’s agricultural lands as well as its open spaces and public resources. Managing urban boundaries also directly improves the efficiency of urban services and infrastructure, passing on cost-effectiveness to local taxpayers.

Meanwhile, since the creation of LAFCOs, Santa Clara County’s population has nearly tripled. LAFCO’s presence has encouraged in-fill development, walkability, and transit-oriented development in the County. Without LAFCO, this landscape would be a patchwork quilt of low-density, ineffectively-serviced residential neighborhoods and isolated, no-longer-viable farmland. Sprawling Phoenix, Atlanta and Houston experienced similar booms, but without regulatory bodies such as LAFCO they have resulted in some of the least efficient and least walkable metropolises – and they are now actively struggling to make up for past oversight.

By order of the State, LAFCOs are charged with stewarding the future of their counties.

In Santa Clara County, LAFCO has curbed the loss of agricultural lands, encouraged the densification and walkability of our cities, increased regional climate resilience, and promoted the cost-effective delivery of services that are funded by taxpayers. 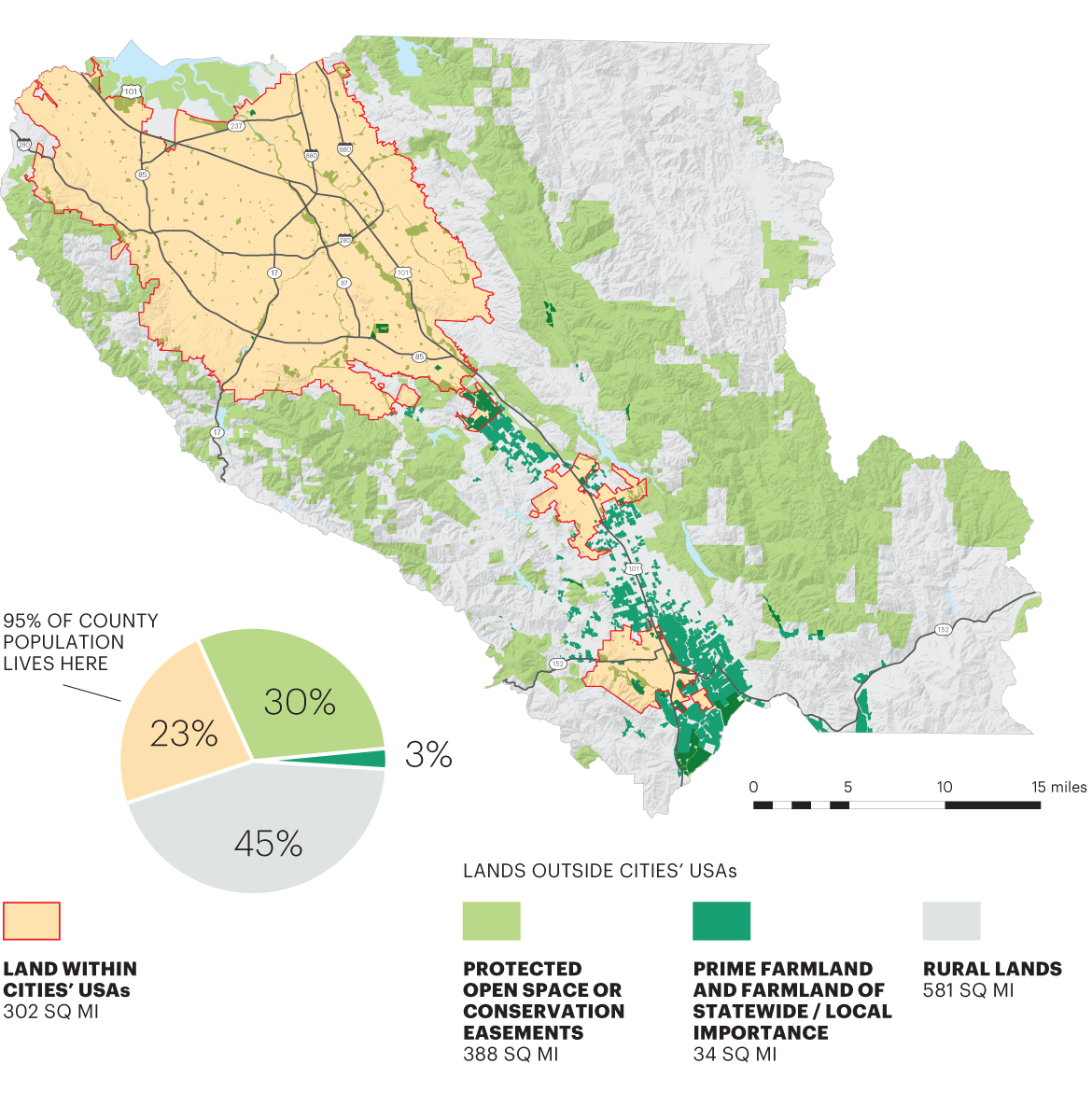 Today, a new dynamism characterizes Santa Clara County. Population growth is expected to continue, with the total shortly cresting over two million and adding some 300,000 more by 2030. Already, housing affordability is at an all-time low, and daily traffic is at an all-time high. Through its planning and regulatory powers, and its state mandate to guide urban development patterns, LAFCO will look out for the public interest and help ameliorate these challenges, sustaining the quality of life that has brought such prosperity to Santa Clara County. 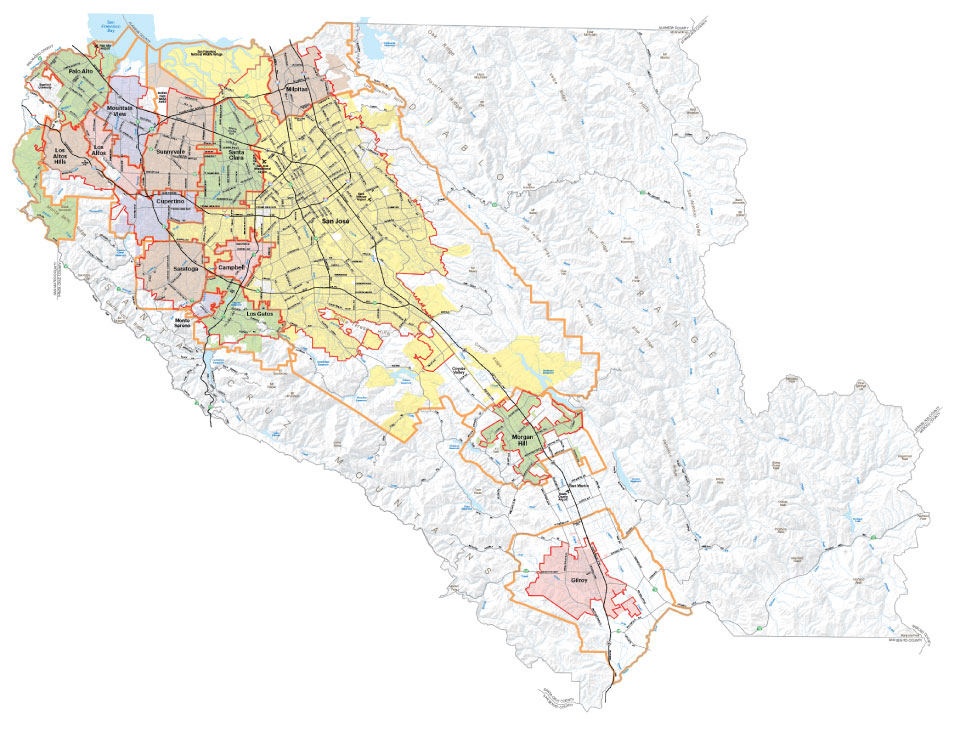 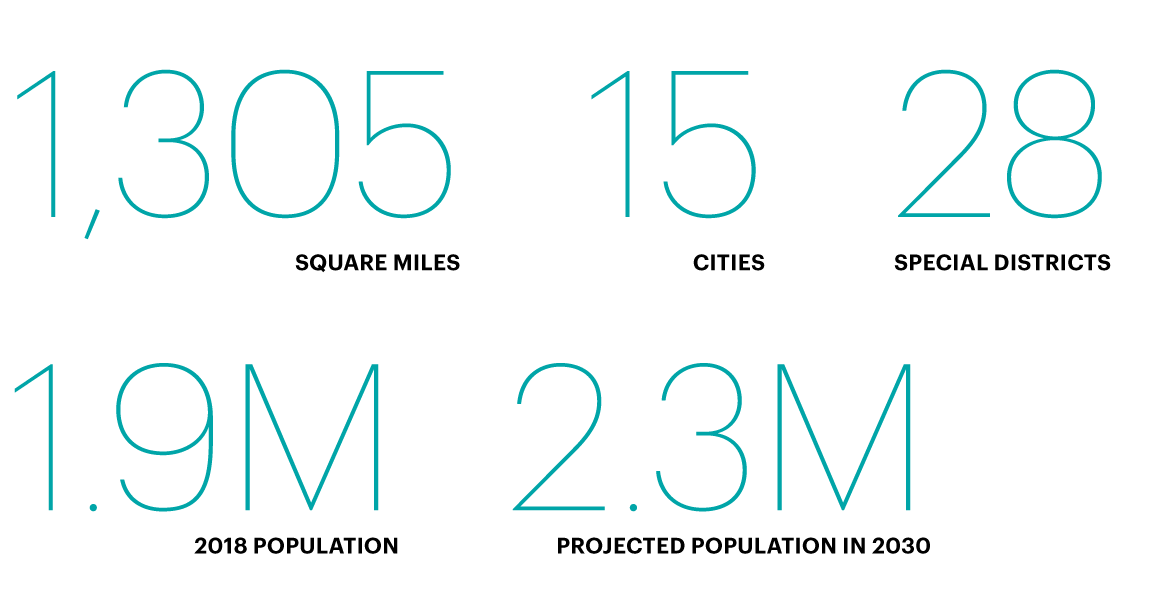 What Does LAFCO Do?

LAFCO plans for orderly growth and development by considering proposed amendments to urban service areas of cities; and works collaboratively with local agencies on growth, preservation, governance and service issues by conducting service reviews, prior to updating the spheres of influence of cities and special districts once every five years, or as necessary.

Santa Clara County has a long history of being exceptional. Today, tremendous tech growth and the remaining farmland and open space are both important elements to the livability and sustainability of the county. LAFCO is a preeminent steward of this diversity and dynamism, steering growth where urban services can be delivered efficiently while protecting vital working lands and open space. In these ways, LAFCO’s presence creates public value across Santa Clara County, protecting natural resource lands while facilitating development of vibrant communities.